The FJ Summit has now officially ended. This page remains here for reference of the great times we had.

From 2007-2019, the FJ Summit has brought together Toyota owners from across North America and beyond. Strangers come together to form an enthusiastic community intent on sharing their love of the vehicle and four-wheeling. While four-wheeling is always an important focus of the event, the FJ Summit was far more than just organized trail runs. Summiteers attended clinics and learned off-road and vehicle skills from renowned instructors. Vendors meet with participants at their booths and on the trails, and evening social activities including sponsored dinners which give people a chance to mingle and have fun.

The fund raising has allowed the FJ Summit to give over $180,000 to a number of deserving organizations, including Stay The Trail, Ouray Mountain Rescue, the local fire fighters and sheriff’s department, and two “FJ Summit” college scholarships to deserving local high school students.

The FJ Summit caters to more than just the off-road driver; it strives to be an entire vacation for the entire family. To do this, the FJ Summit is hosted in the beautiful, visitor-friendly mountain town of Ouray, Colorado. When participants are not on the trails, the FJ Summit provides a number of amenities including catered dinners, a kid’s raffle and classes and clinics to help ensure that everyone learns and grows in this sport. We add to that a substantial vendor presence to create an industry event where vendors can meet and promote their products to a willing congregation of customers. Outside of the FJ Summit, the town has hot springs, artist galleries, shopping, horseback riding, and hiking. 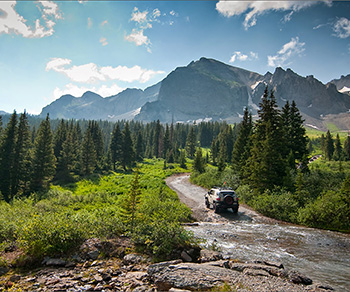 Digital Strategist, web developer and founding member. Seth has selflessly taken on the FJ Summit Director role this year. Always with a smile on his face and a sharp quip on the tip of his tongue, Seth juggles dozens of activities while barely breaking a sweat. Participants, Vendors, Co-Directors, Town Locals, everyone looks to Seth to make FJ Summit happen. He has never let us down and promises not to start trying. Seth spends his time in eastern PA but was born in Colorado and has also spent time in Vermont and Texas. In addition to exploring the outdoors and tinkering on his truck he likes to spend time cooking and finding new food and spirits he can enjoy.

Sponsor communicator, staff motivator, God fearing, family loving, 200 Series Land Cruiser driving, Austin, Texas based Eleven-time Summit attendee! In 2012, he was tasked with putting together a rock-solid crew of new directors and succeeded with a fantastic team. Matt would like to thank everyone from attendees to volunteers for their support in making the FJ Summit simply the BEST event to be a part of. Special thanks go out to Matt’s wife, Kathy, and their kids, Penelope, Emma and Luke, for all their hard work and support!

Ty is grateful to have been a part of the FJ Summit since the beginning. His IT talent helps hold the FJ Summit website together. Taking on the daunting task of managing the amazingly abbreviated (less than 30 seconds) registration is just part of the story. Ty has created and manages an amazing FJ Summit database, registration process, badges, fees, bourbon supply. Do you know how many vehicles with 265/70/17 tires are at this year’s event? Ty does as he is the keeper of the keys of the 1’s and 0’s. He always has a smile on his face and a kind word to say. Still has his first truck he got in high school, his original Scout but now has a 4Runner which he loves almost as much.

Permitting, local business and government liaison and local presence. Jonathan grew up in Western Colorado and spent his childhood exploring the state on two feet, two wheels, two skis and later, in 4x4 vehicles. Jonathan originally got into Toyotas after the arrival of his identical twin daughters which spurred the need for a larger vehicle. He and family can be found driving their 100 series Land Cruiser, Toyota Tundra and Cessna 175 all over Colorado and Utah. Getting new people and families into offroading while encouraging environmentally and socially responsible trail use is Jonathan’s passion and ultimately what lead to his involvement with the Summit.

No trail could depart without the hard work James does to coordinate, train, and support all of the trail leaders! Known as Woodsman on the FJ forum, our trail boss is a self-employed custom woodworker/cabinet maker from Indiana with a background in manufacturing and continuous improvement. He saves urban logs from the wood chipper and dismantles old barns to reclaim the rustic and weathered woods. When he isn’t making sawdust, he enjoys skiing, mountain biking, renovating vintage Airstream trailers and driving his Sandstorm FJ Cruiser. He may live in the Midwest but his business and love of the mountains and deserts brings him west many times each year.

Industrial Designer, serial entrepreneur, inventor, husband and dad to two beautiful women, founding member, and recalcitrant truculent. Tim is happy to lend creative design input to help make the FJ Summit special. He keeps us with a level head, and always reminds us that we are at the Summit to have fun! Always eager to help out, he has dedicated his time making sure the Summit supports our military Veterans as well as ensuring the FJ Summit supports worthy causes. Tim spends most of his time thinking about what to design next and has spent nearly a lifetime in Texas. In addition to wheeling, recently started a fast car hobby and likes to go fast! Tim is running out of garage space, which he seems to think is a problem.

A very special thanks go out to the families of all the directors for their support. The Summit takes months of planning and sometimes that planning goes way into the night. Without their support and understanding, the Summit not be possible.

Shane Williams and his wife Angie, founders of TCT Magazine, do an amazing job each and every year covering the FJ Summit and tirelessly working to put together our amazing event guide, thanks Shane and Angie.

Kristin Kritz, K2! You will immediately notice Kristin, she is the one with the camera stuck to her at all times. Kristin is our chief photographer, without her it would all just be a memory, Thanks K2!

We could not do it without you!

Big thanks go our to all of our volunteers. From registration to trail leading, the volunteers make this event happen.

Thanks to the town and citizens of Ouray, the Ouray Chamber of Commerce and the local municipalities including the Ouray Police, EMS, and Fire department for allowing us to hold the FJ Summit in their beautiful town each and every year.

Thanks to Ouray Mountain Rescue for being there for everyone that leaves the paved road and chooses the path less traveled.

Thanks to Ryan Hein of the Twin Peaks Lodge for being our awesome host. Ryan always does a great job at putting food in our bellies and a tent over our heads, Thanks Ryan!!

And thanks to all of you who trust us with your vacation plans.

See ya in Ouray!